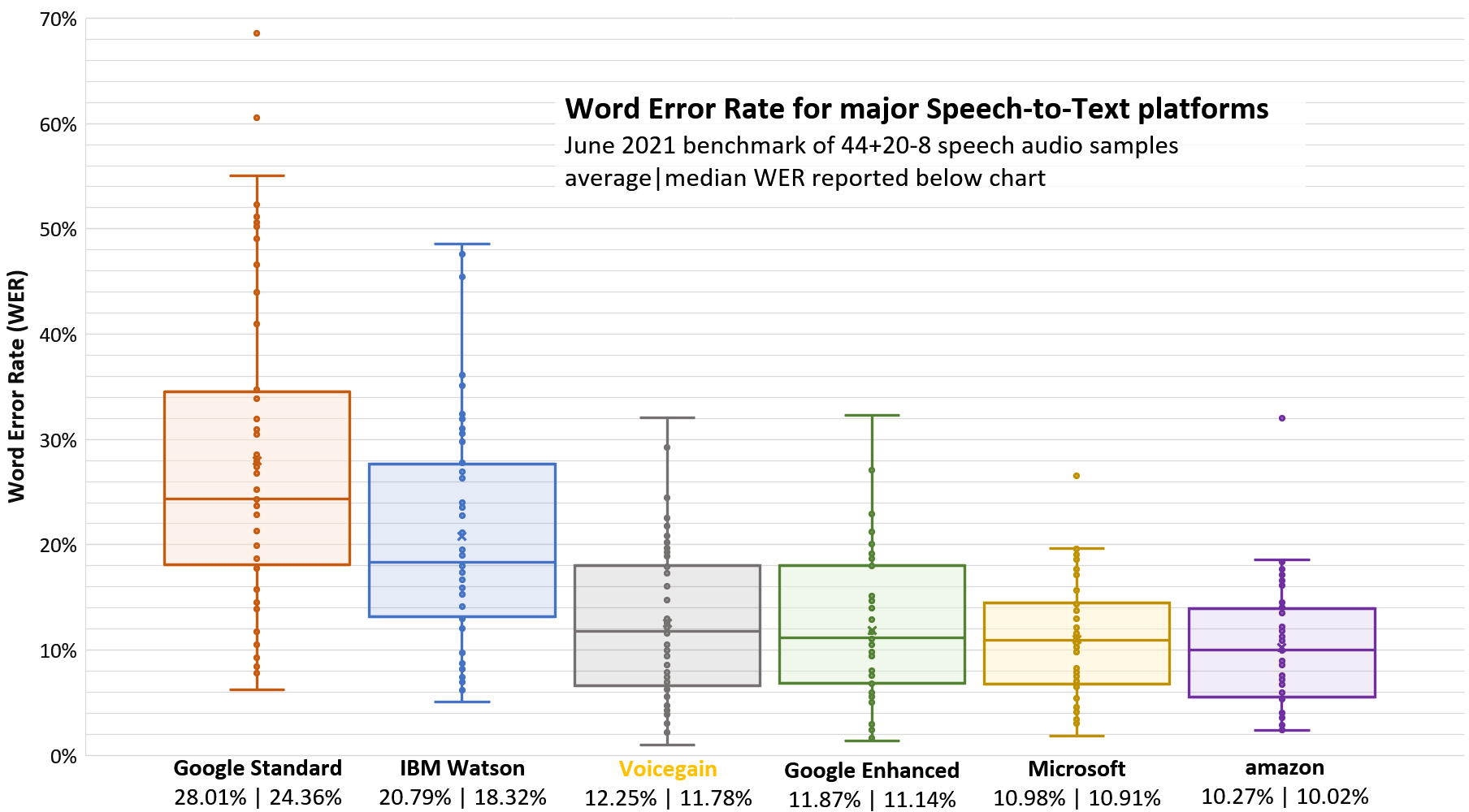 It has been over 8 months since we published our last speech recognition accuracy benchmark (described  here). Back then the results were as follows (from most accurate to least): Microsoft and Google Enhanced (close 2nd), then Voicegain and Amazon (also close 4th) and then, far behind, Google Standard.

We have repeated the test using the same methodology as before: take 44 files from the Jason Kincaid data set and 20 files published by rev.ai and remove all files where the best recognizer could not achieve a Word Error Rate (WER) lower than 20%. Last time we removed 10 files, but this time as the recognizers improved only 8 files had their WER higher than 20%.

The files removed fall into 3 categories:

Some of our customers told us that they previously used IBM Watson, so we decided to add also it to the test.

In the new test, as you can see in the results chart above, the order has changed: Amazon has leap-frogged everyone by increasing its median accuracy by over 3% to just 10.02%, it is now in the pole position. Microsoft, Google Enhanced  and Google Standard performed at approximately the same level. The Voicegain recognizer improved by about 2%.  The newly tested IBM Watson is better than Google Standard, but lags the other recognizers.

Voicegain is tied with Google Enhanced

However the results for a use case depends on the specific audio - for some of them Voicegain will perform slightly better and for some Google may perform marginally better. As always, we invite you to review our apps, sign-up and test our accuracy with your  data.

What about Open Source recognizers

Regarding Kaldi we have not benchmarked it yet, but from the research published online it looks like Kaldi trails Google Standard too, at least when used with its standard ASpIRE and LibriSpeech models.

Out-of-the-box accuracy is not everything

When you have to select speech recognition/ASR software, there are other factors beyond out-of-the-box recognition accuracy. These factors are, for example:

2. If you are building a cool voice app and you are looking to test our APIs, click hereto sign up for a developer account  and receive $50 in free credits

3. If you want to take Voicegain as your own AI Transcription Assistant to meetings, click here.