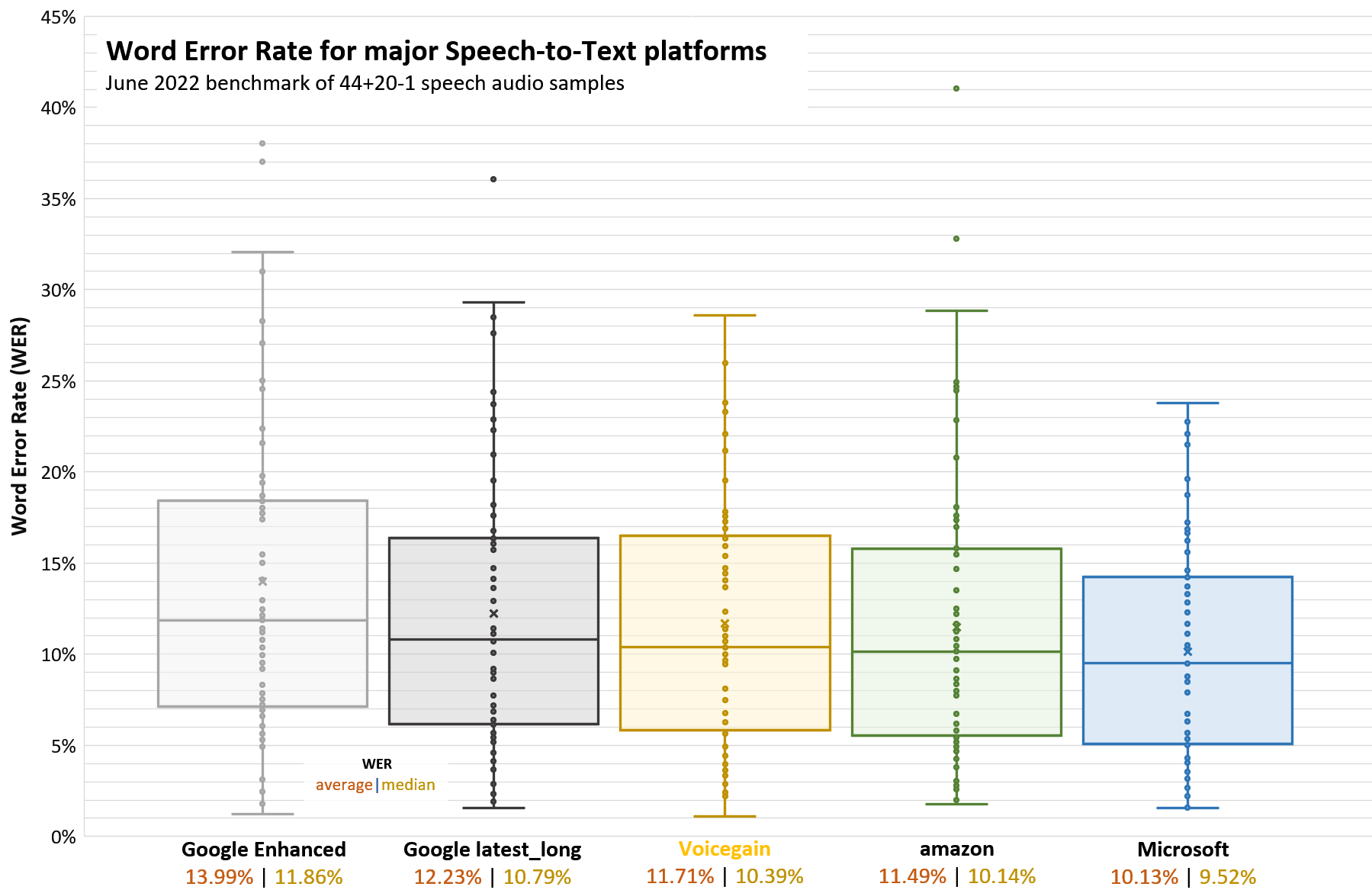 It has been over 7 months since we published our last speech recognition accuracy benchmark. Back then the results were as follows (from most accurate to least): Microsoft and Amazon (close 2nd), then Voicegain and Google Enhanced, and then, far behind, IBM Watson and Google Standard.

Since then we have obtained more training data and added additional features to our training process. This resulted in a further increase in the accuracy of our model.

As far as the other recognizers are concerned:

We have decided to no longer report on Google Standard and IBM Watson accuracy, which were always far behind in accuracy.

We have repeated the test using similar methodology as before: used 44 files from the Jason Kincaid data set and 20 files published by rev.ai and removed all files where none of the recognizers could achieve a Word Error Rate (WER) lower than 25%.

This time only one file was that difficult. It was a bad quality phone interview (Byron Smith Interview 111416 - YouTube).

You can see boxplots with the results above. The chart also reports the average and median Word Error Rate (WER)

All of the recognizers have improved (Google Video Enhanced model stayed much the same but Google now has a new recognizer that is better).

Google latest-long, Voicegain, and Amazon are now very close together, while Microsoft is better by about 1 %.

Let's look at the number of files on which each recognizer was the best one.

Note, the numbers do not add to 63 because there were a few files where two recognizers had identical results (to 2 digits behind comma).

We now have done the same benchmark 4 times so we can draw charts showing how each of the recognizers has improved over the last 1 year and 9 months. (Note for Google the latest result is from latest-long model, other Google results are from video enhanced.)

You can clearly see that Voicegain and Amazon started quite bit behind Google and Microsoft but have since caught up.

Google seems to have the longest development cycles with very little improvement since Sept. 2021 till very recently. Microsoft, on the other hand, releases an improved recognizer every 6 months. Our improved releases are even more frequent than that.

As you can see the field is very close and you get different results on different files (the average and median do not paint the whole picture). As always, we invite you to review our apps, sign-up and test our accuracy with your  data.

Out-of-the-box accuracy is not everything

When you have to select speech recognition/ASR software, there are other factors beyond out-of-the-box recognition accuracy. These factors are, for example:

2. If you are building a cool voice app and you are looking to test our APIs, click here to sign up for a developer account  and receive $50 in free credits

3. If you want to take Voicegain as your own AI Transcription Assistant to meetings, click here.